There are so many contenders bidding for Top Villain of 2015, from skeevy CEOs to overprivileged young murderers. This bumper crop of horrible people — well, horrible men, to be more accurate — was tough to whittle down. Before we get to this year’s dishonoree, let’s meet the runners-up. 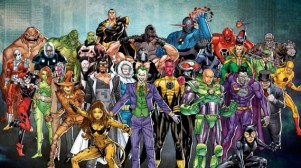 Why can’t our villains at least be cool, like these guys?

You will note this list is not very political. While one elected official shows up, it has nothing to do with his political party. Lots of people would call either Trump or Hillary the worst people in America because they are the frontrunners of their respective parties, but not even those two can compare to the depravity of the following luminaries.

Martin Shkreli. The whiny little crook with the most punchable face in America, the corrupt CEO who makes Lex Luthor up there look honest and noble by comparison, needs little introduction. But a quick recap: After leading two hedge funds to abysmal failure by a combination of embezzlement, fraud, and rank incompetence, Shkreli and his equally repugnant confederates took over a tiny pharmaceutical company marketing a little-known medication for patients with advanced AIDS or cancer. He then marked up the cost by 5,500% in a move of comic dickery. And like any comic-book-villain scheme, the whole thing collapsed when his past evil actions came back to haunt him. Bonus: he bought that unreleased Wu Tang album for $2 mil — and then bragged about how, not only would he never let anyone else hear it, he’s never even listened to it himself.

Bill Cosby. In hindsight he was a contender for Worst Person in America for every year of his career, but it wasn’t until this year that we fully came to know the true nature of his disgusting mind and soul. As a Hollywood celebrity of the ’60s, ’70s and ’80s, he could have had all the sex with all the willing women he could have possibly wanted. (If even a scumbag like Charlie Sheen can arrange for an endless parade of women and men coming through his home, it would not have been hard for someone with Cosby’s formerly pristine reputation.) But he had to instead prove the old adage that rape really is about power and not sex, literally preferring to drug and rape unwilling women over sex with willing women. There was no relatable motive for his crimes, such as lust or greed. It was one of those senselessly evil things that we not only are unable to comprehend — but also, we really don’t want to be able to comprehend.

Ethan Couch, better known as the Affluenza Kid. Couch was certainly a contender for Worst Person of 2013, the year when he drunkenly slaughtered four innocent people in a DUI accident and leaving his friend paralyzed and brain-damaged for life. The judge at his trial bought the ridiculous defense that his white, affluent privilege literally made him less responsible for his actions, forever proving him a walking example of what #BlackLivesMatter is taking about. He again finds himself a contender for Worst Person after he decided that even probation was just too much of a drag for a winner like him. Couch and his always-pliant mother then hatched a scheme to run away to Mexico. But not just any part of Mexico, though. Not for a winner like him! No, he had to go where there’s still lots of white people around, in one of the country’s vacation hotspots. He now awaits extradition back to the States where we’re all sure he will get the same level of punishment that a black kid in his shoes would get. Yep, absolutely.

Sepp Blatter. It takes a special knack for evil to be found too corrupt to manage a professional sports league, where corruption is even more of a requirement than it is for a South American presidency. “Too corrupt for FIFA” is as absurd a concept as being bigger than infinity, or being too gay for men’s figure skating. Blatter is charting new waters when even Roger Goodell has to step back and say, “Damn, this guy is a real prick.” The indolence, kickbacks, favoritism, nepotism, and incompetence of the Blatter FIFA era are fodder for many John Oliver rants, and the only reason why Blatter can’t win this year’s trophy is because he is far worse for countries other than our own that actually give a damn about soccer, including Oliver’s UK. (What does MLS rank in sports viewership in America, 27th?)

Jared Fogle. Congratulations, Jared: you’ve plumbed new depths as Most Evil Corporate Spokesperson of All Time. I’m pretty sure the trophy is yours to keep forever, assuming they don’t find all the bodies buried in the backyard of Flo the Progressive Girl. This smelly pedophile’s crimes are really too horrifying to recount here, but this article lists some of his depredations if you have a strong stomach. He’s going to be in prison for at least 10 years. He deserves to stay in one for the rest of his benighted life. Or be strapped down with a needle in his vein. Either way works for me.

Rahm Emanuel. There were a lot of contenders for the worst of the neoliberal Boomerists in charge of our institutions. From university presidents (especially NYU) to hospital executives to bankers to media professionals to any of Hillary’s top lieutenants to Hillary herself. But in the end, the choice was not hard. Rahm Emanuel’s mixture of arrogance, entitlement, and complete indifference to black people has had lethal consequences for the unfortunate residents of his town. And like all Boomerists, he literally could not care less. After all, the only way he sees the South Side is through the window of a fast moving, tinted-window black SUV. Oh sure, he cares about his image and his PR like any reptilian neoliberal. He cares about efforts to recall him from office. But his constituents? They can all hang for all he cares, just as long as they keep their dirty mitts off of him! The Democratic Party used to be the home of corrupt officials who still had an unmistakable love of their proletariat base. Huey Long. Edwin Edwards. Dan Rostenkowski. This tradition of boorish yet charming, corrupt yet well-loved Dems runs all the way back through Tammany Hall. And now? We get soulless hacks like Rahm and his pals instead, who rely on armed guards and gates and flunkies and drivers to ensure they never must suffer the presence of a working class person. Does Rahm even have a personality at all? Do any of these people, other than Bill Clinton? Even Republicans are probably reminiscing about the first Mayor Daley at this point.

But even these shitbirds must stand in awe of our winner: Daniel Holtzclaw.

Holtzclaw, you may remember, is the racist Oklahoma cop convicted of multiple counts of rape and sexual assault. He intentionally preyed on people of color because he knew full well the system — the same system he swore an oath to uphold — discredits and ignores the words of women of color and women of poverty when they come forward. He is believed to have at least 13 victims. Through some minor miracle, his final victim made herself heard, and he was recently convicted. His conviction was the only time Holtzclaw expressed even a shred of remorse. Not for his victims, of course. But for himself. Poor, poor guy. How could they do this to him?  So congratulations, Officer Daniel Holtzclaw: Worst Person in America, 2015!