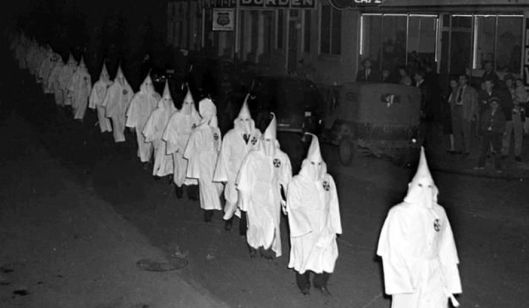 Following the shocking Trump victory — shocking even to the Trump campaign, which hadn’t bothered to plan a transition process, although not so shocking to the LA Times / IBT pollsters — a theme immediately began to circulate among the liberal media and pundits:

This was a victory for white supremacy. Full stop.

“I have long since believed that the United States is deeply racist at its core,” thundered the New York Daily News’ Shaun King mere minutes after the race was called for Trump. “This election has confirmed it.”

“Donald Trump’s Triumph Is a Victory for White Supremacy,” blared the headline for Cosmopolitan’s Brittney Cooper. In case that didn’t drive the point home, the subhead helpfully clarifies: “How did this happen? Racism.”

“Our generation says no, as do first-time voters, to what this man and his presidency represent,” declared Lena Dunham, once again reminding you of her self-appointed position of Official Millennial Generation Spokeswoman. “We reject, wholesale, his brand — any brand — of hatred and bigotry.”

Reading this, you may be forgiven if you’re wondering whether “ex”-KKK leader David Duke himself had been voted our 45th president.

This is not what racism looks like, and this isn’t what got Trump elected.

Oh, sure, we all know about the alt.right, the successors to the old Klan and Skinheads. Nobody’s gotten more press in 2016 than the alt.right, other than Trump himself. One thing they don’t tell you: the alt.right’s numbers are minuscule at best. It’s hard to get an exact read on their actual voting strength, but their direct trolling of journalists on Twitter and other platforms led to them getting amplified by these journalists as a vast movement, tens of millions strong. In reality? Active members of the alt.right (defined roughly as Americans, and not Russian trolls, posting on alt.right sites or Twitter) number a few hundred thousand at most. The Daily Stormer, regarded as the biggest and most active of these sites, ranks just a paltry #6,307 on Alexa in the USA — and that’s after the Trump election. Worldwide, it’s #21,987, with a readership most likely under 150,000.

The fact that nearly all of the alt.right posts anonymously tells you all you need to know about their actual strength. If this really were a movement with wide and deep inroads in America, these guys (for they are almost entirely guys) would have no trouble finding employment even if they used their real names. In reality, getting associated with their kind of rhetoric will end anyone’s career — anyone. It’s almost impossible to get rid of a pro-sports franchise owner, no matter how incompetent or malevolent — the one thing that can is racist speech.

And oh yeah. David Duke, mentioned earlier? He garnered a whopping 3% share of the vote for senator of deep-red, good-ol-boy Louisiana.

So, no. Trump’s victory was not the resurrection of the Klan, because that’s simply not how most racism works in this country.

To really see racism, you have to look at a typical school-integration fight happening right now. Sure, the white parents will use every “I’m totally not racist” excuse in the book, but in reality, it’s always the same: They do not want their precious white little Ethans mixing with those people. They paid good money to live in a white school district away from those children. And this is going on right here in Lena Dunham’s and my back ground: the five boroughs. How many of these white anti-integration parents were also at Hillary’s Javits Center election party? How many would gladly tell you how racism is only a problem with those rural, Southern Trump-voting whites, and not themselves? Does anyone seriously imagine Lena Dunham’s eventual kids going to a school that’s less than 90% white?

As for actual Trump voters, they’ve developed typical white-exclusion into a crude art. I use as example the noxious beast known as the Long Island Republican, Trump’s actual base — and they do vote in numbers. Long Island really is the best example of what I’m talking about, hosting as it did the first haven of white-flight suburbanites, Levittown. With racial segregation strictly enforced by redlining, Long Island attracted thousands of whites desperate to get away from where they work, multicultural New York City, soon followed by white flights out of nearly every other major city. The Long Island Republican served as the lifeblood of the John Bircher Movement. Its two suburban counties would later spawn two of the most definitive Long Island Republicans around: Sean Hannity and Bill O’Reilly.

Neither Hannity nor O’Reilly would ever indulge in the openly racist diatribe favored by the alt.right, but they are nevertheless primarily driven by a hatred of diverse New York City life. In fact, nearly everything they believe in is just opposition to liberals; as this election showed, they have no principles or positive beliefs, happily endorsing any and all of Trump’s most big-government policies. They only voted for him to stick it to liberals. That’s it. Their negativity is all they’ve got.

But even so. They are not wearing white hoods.

This is what the social-justice movement simply can’t wrap their heads around. They still think in terms of the racism of the Klan, of George Wallace, of Bull Connor. They believe that literally every Trump voter is secretly in cahoots with the Klan or alt.right, or at least sympathetic to them — mirroring, incidentally, Long Island Republican views of all Muslims being in cahoots with the terrorists. They still think most white people, or at the very least most white Trump voters, are going around dreaming of white supremacy and of subjugating black people (or in uniform social-justice parlance, “owning black bodies”).

In reality, whites from Lena Dunham to Sean Hannity don’t hate black people as much as they want to exclude them. From their communities, at least. They want to live in white neighborhoods, send their kids to white schools, and count as friends mostly other white people. That is what racism looks like. Not a burning cross.

And in any case, it’s blindingly obvious that racism took a back seat this election to a different -ism: sexism. The white female candidate lost; her black male predecessor won. Including over her in the 2008 primaries. It’s like people are hardly even allowed to speak about this because concerns about women’s rights must always take a back seat before every other liberal constituency, including minority rights. (This is an intentional feature of latter-day feminism called intersectionality — more on this later.) Trump’s numbers were actually flat compared to Mitt Romney’s 2012 popular vote totals — any gains among alt.righters were no doubt offset by Republicans refusing to turn the lever for that orange clown. It was Hillary’s numbers that fell off a cliff compared to Obama’s, as millions of Dem voters eager to vote for our first black president suddenly found themselves cool to the idea of voting for our first female president. If Trump’s Access Hollywood hot-mic gaffe with Billy Bush had been racist and dripping with the n-word, he really would have been finished. But since it was only sexist, the supposedly damning tape was all-but-forgotten after a couple weeks.

This election post-mortem emphasizes the role sexism played in Hillary’s downfall: “Trump promises a world free of political correctness and a return to an earlier era, when men were men and women knew their place.”

But back to white exclusion: this attitude hasn’t really changed much since the founding of Levittown. Long Island Republicans may be more honest about it, but high-powered white liberal pundits and talking heads and activist actors sure do mysteriously find themselves living in white neighborhoods of NYC and DC, don’t they? Enough tweeting about swastikas, Shaun. Maybe start asking some of your liberal coworkers at the Daily News where they live — and why.

5 thoughts on “The Klan is not what racism looks like.”