Read any news story about gender and sports these days, and it will almost always be about transgender issues. “Should transwomen be allowed to play in women’s leagues,” that sort of thing. So naturally, my assumption was that transgenderism was in play upon first encountering this story: 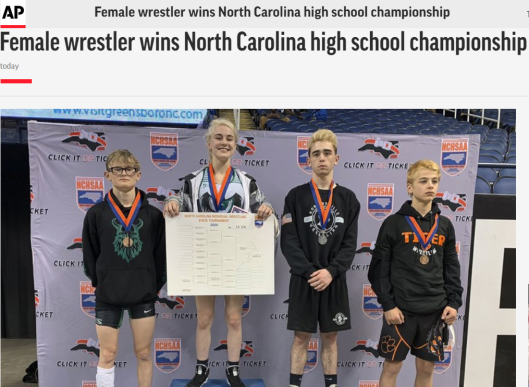 But, nope. Trans has nothing to do with it. For one, this is clearly a co-ed league, and there is no mention of this champ, or of her opponents, being trans. A cis girl went into a wrestling meet, kicked the asses of her cis male opponents, and walked away with the gold. That’s it; that’s the story. And just look at this badass’s cocky alpha grin versus the sullen dejection of her runners up. Fucking awesome.

Of course, this does bring up the question of how, exactly, a girl can physically not only go toe-to-toe with at least somewhat post-pubertal boys, but also come out on top. The boys should have a definite advantage in upper body strength within the same weight class. Right?

Is she juicing? I have to doubt it. The effects of illicit testosterone are far more noticeable on females than males, as East German women’s athletes could’ve attested, and this girl couldn’t exactly pass for Barry Bonds. Besides… roiding up, and thereby risking her college career/scholarships, just for a high school title? Really?

More likely: she’s naturally in the upper regions of the 99th percentile of girls her size in terms of strength and stamina. (I mean, someone has to be, right?) And while the average girl will of course bench far less than an average boy of the same age and weight, that’s also just it: average. The remarkable variability among specimens of our peculiar species results in some astonishing X-men-level outliers, from certain East African lineages owning the sport of marathon running, to this girl beating out trained, practicing boy wrestlers, to an overweight, middle-aged diabetic patient I once saw with a resting heart rate rivaling that of Tour de France bicyclists.

People have no problem accepting the existence of Hawkins-level outliers in intelligence… but in the physical arena, we still have a hard time wrapping our minds around it.

Sadly, the term “outlier” goes both ways, and I speak with some authority. If the girl from above has male upper body strength through some weird condition or gene, then I have precisely the opposite situation. I don’t know why, but I never really got the teenage-boy surge of strength to my arms, to the point where I use weights at the gym equivalent to what women there use… my last personal trainer actually made fun of me for it. There’s been a pretty low ceiling on what I can bench even with regular workouts. A girl once broke up with me because she jokingly pinned me down one time… and I couldn’t get her off me. (I still have no problem with lower body strength… in high school I never understood why I could crush it with the leg press machine but practically nothing else.)

Poor me? Nah; in the list of reasons why my life is shit, it doesn’t even break the top 100. I have to be careful not to arm wrestle any girl I date, that’s all. Or, perhaps, finesse the inevitable jar-opening request.

I just enjoy the outliers of the human experience in all its forms and how we defy stereotypes. Whether it’s the female ass-kicker above, or a man who excels at early childhood education or being a stay-at-home dad for his high-earning wife, or the fact that the NFL’s current best two quarterbacks are black and its best running back is white. Or seeing certified, card-carrying, neanderthal right-wing conservative activists refuse to bend the knee to the host of Celebrity Apprentice. Fucking break expectations. Smash boxes. Nobody remembers the followers. If you can’t be a leader, be a goddamn renegade. Never let them see you coming. It’s no guaranteed path to happiness, sure. But for some, it’s the only way to live.

I recently mashed through some quite curious thoughts while recently sick with an upper respiratory virus, and want to put them down as words, even if I don’t really understand them fully, being a bit outside my area of expertise.

One of the questions that has long bedeviled particle physicists, and which cannot be adequately explained by the Standard Model, is: why, exactly, does only matter exist in the known universe, and not antimatter? After all, all equations predict that any process that creates matter, whether as great an explosion as the Big Bang or as tiny as those fomented by our artificial experiments, should also create antimatter in exactly equal parts. Indeed, this is in fact always the observed result in particle accelerator tests. However, there is no known antimatter left over from the Big Bang in the observable universe. And if it all had simply annihilated against matter, then there would be no matter left over, either.

This leads to two possibilities: one, that the antimatter does exist but is somehow outside of the observable universe. Or, two, that our current equations are wrong and that matter does, in fact, slightly outnumber antimatter in these genesis reactions (or actions).

Scientists have mostly dismissed the first possibility and are hard at work trying to prove the second. For instance, there is a decades-old project to prove something called “proton decay,” which, for arcane reasons beyond my ken (no, despite what comic books say, physician and physicist are not interchangeable), would be necessary to prove that matter/antimatter asymmetry is valid. The problem: every one of these tests have failed. Scientists have responded by expanding and expanding again the proposed half-life of the proton, but even within the new parameters, protons still stubbornly refuse to spontaneously fall apart.

But what if they’re wrong? Or, to rephrase: what if their equations were right all along? That antimatter was produced in equal parts in the Big Bang, but that the antimatter is, in fact, outside of what we can observe in the universe? How can this be?

To answer that, we have to first turn to a fascinating property of antimatter that would not only explain where it all went at the beginning of the universe, but could open a rabbit hole leading down completely unorthodox paths in physics that could lead to the secrets of the universe itself.

Imagine, if you will, the title of this post: A positronic light bulb. Or, rather, a light bulb made entirely of antimatter, along with an antimatter battery, antimatter wiring, and an antimatter switch. Such a device would be powered by “reverse electricity,” using positrons (aka antimatter electrons) instead of normal electrons. Let’s say that we somehow construct such a device, at enormous expense, and house it in a compete vaccum. How would it work? Or to phrase it more precisely: what happens when you flick the switch?

In a regular lightbulb, as we all learn by fifth grade: flipping the switch closes the circuit so that the current may now flow unimpeded from the battery’s negative side. First, electrons (assuming a direct current) emerge from the battery, flow through the wires and the bulb itself, before terminating on the battery’s positive side: 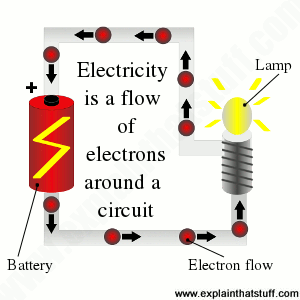 While we leave it on, the battery’s negative (cathode) side slowly discharges its supply of negative charge, while the positive (anode) side slowly gains electrons and therefore has its positive charge diminished at the same rate. Eventually, the battery is depleted, the current of electricity stops, and the light bulb goes out.

Now, if this whole thing were made of antimatter parts?

Well, the battery would be made of the antimatter version of the exact same stuff, like zinc and magnesium oxide, same as the wires and bulb. Only, it would be a flow of positively-charged particles that power the bulb. Here is the progression:

The light turns on.

And then, the switch is flipped.

Yes. The light came on before we flipped the switch. The effect has preceded the cause. We have just violated one of the most fundamental rules of not only physics, but our basic conception of the time and space: causality.

This is possible because another way of viewing antimatter is that it’s matter, only going back in time. If a normal electron has a time paramater t of 1, then a positron is an electron, only with t = -1. This sounds strange, but the math checks out! (For completeness, note that photons that make up light are t = 0. So, the light coming out of our positronic light bulb is no different than any other light.)

Going back to the Big Bang question, we have our answer. The antimatter from the great explosion was sent backwards in time. Because that’s simply what antimatter does. What’s more, there’s no reason why the antimatter universe can’t have antimatter stars, suns, planets, even life. Indeed, there may be antimatter scientists on an antimatter Earth right now, carefully creating and experimenting with the strange, reverse stuff we call matter.